We left on September 7 and gave ourselves 5 days to make the 920 km / 570 miles road trip from Sydney to Gold Coast, so we could stop in a few towns along the way.

We saw a billboard on the road side for the Australian Reptile Park. On an impulse we chose to check it out even though it was already close to closing time. We saw flying foxes that, as we learned from a zoo employee, often get electrocuted in the wild because when they get off power lines, they drop, fly up, and short 2 lines or short a line and the pole (whereas birds simply fly up and away), sigh. We found out they also have free range kangaroos. We fed them, including a mother who had a joey in her pocket.

The next two stops were for a seafood dinner in Newcastle, and for our hotel night at Port Macquarie, which is where we were victims of brand similarity: we were looking for "Corner cafe" which had good online reviews, but we walked past a "Co. cafe" and thought it was it, ate there, only to find out afterward the real Corner cafe was a block away. Oh well.

The boardwalk of Port Macquarie had a few tall pelicans, and hundred of rocks painted by locals or visitors. 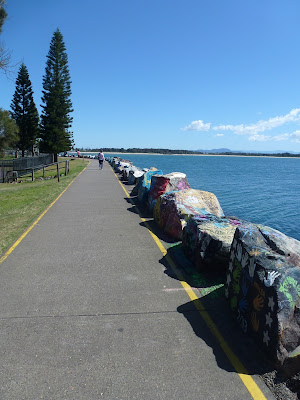 Something picqued my interest: a large sign reading "jet ski rental". It was the perfect warm and sunny day for it, so we went for it. Lauren was a bit nervous at first, but we took turns driving, she gained confidence, and she rode it up to 70 km/h / 45 mph. 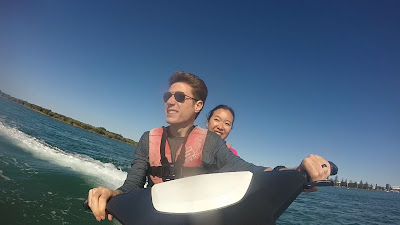 We continued the road trip, to Coffs Harbour. The next morning we heard a new Aussie slang term: "brekkie" (for breakfast). Further along the road there was the Big Banana "family fun center": minigolf, toboggan ("luge d'été" in french —we went on 2 rides), water slides (which were being renovated and would open "very soon"), etc. This was more for kids than adults, so for us the most entertaining was really taking pictures in front of the famous big yellow banana at the entrance. 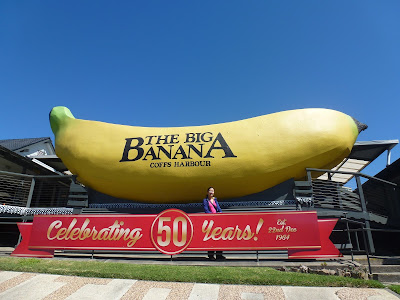 Lauren took the wheel of the rental car and was happy to drive on the left side of the road for the first time. We passed through Byron Bay, where there are lots of hippie beach bum youths, and arrived at Gold Coast where we spent the night.

The next day was what Lauren called the "day of boringness": she spent it applying for a bunch of psychology jobs. Unfortunately the hotel's WiFi stopped working, and the staff could not fix it. I noticed we had an IP TV in the hotel room, permanently attached to the wall, and we were not supposed to access any of the cables behind, but I squeezed my arm in a gap and managed to disconnect the Ethernet cable. I plugged it in my laptop, gained network access, and created a local WiFi hotspot for all our devices so Lauren could continue working.

In Gold Coast we attempted to visit a theme patk called Dreamworld. But there were already long lines at the entrance, and we learned it costs over 100 AUD per person and seemed less interesting than Disneyland, so we abandoned this plan and instead went downtown.

We rented electric bikes, rode around the beach. We saw scary signs like "Warning - Boa Constrictors - Please report sightings at <phone>". The most fun was when we went offroading on a dirt path, where I almost fell off my bike when wobbling through a sandy patch.

Later in the day we drove to Brisbane. Unfortunately, we didn't have any time to do anything since we were headed for the airport the next morning.

Next stop: Cairns!
Posted by Unknown at 3:04 PM