After leaving Waitomo on September 27, being a big fan of the Lord of the Rings, Lauren dragged me to the Hobbiton village movie set (satellite view) where we saw Bilbo's home (Bag Eng), Sam's home, the Green Dragon inn, and the pond. The guide had lots of trivia, here is what I remember:

Here is a shot comparing a scene from The Hobbit 1 with our picture at almost the same location in front of Bilbo's home —I was impressed by how much of the movie shows exactly how the set looks and how little CGI was used:

Later in that same day we drove to Rotorua, where we stayed 3 nights (September 27-30).

We visited the Tamaki Māori Village, where we learned about the culture, lifestyle, and customs of the Māori people of New Zealand. We even tried out doing some dancing (Lauren) and war training games (Marc). They performed the Haka, demonstrated the use of weapons, and cooked chicken, lamb, and potatoes in a hāngi (for us to eat), which is a traditional Māori method of cooking where food and heated rocks are buried in a pit oven. We did not know it at the time, but that village is actually not an original village site, just a model of a traditional village. It was okay, but mostly felt like a show/performance, to be honest. 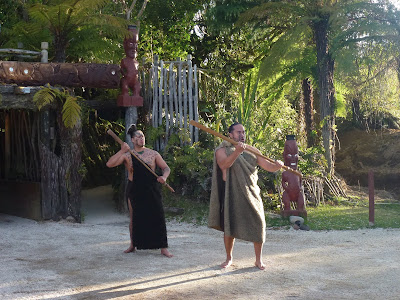 Rotorua is known for its geothermal activity. In fact the biggest lake in the region, Lake Rotorua, was formed from the crater of a large volcano. The geothermal activity is most impressive in the Whakarewarewa Thermal Village, which we visited. This is the site of a Māori village within the city that fully takes advantage of the geothermal heat for cooking, bathing, heating houses, etc. There are geysers, mud pools, hot springs, etc.

A few minutes away from Rotorua is the Wingspan National Bird of Prey Center, where they house many rehabilitated birds.

They have a few different species of birds, but mostly New Zealand falcons. We attended a falconry show: one of them would be released in the open air, the falconer would swing the lure, the falcon would fly in circles over him and dive to attempt to catch the lure which had little bits of food attached to it. 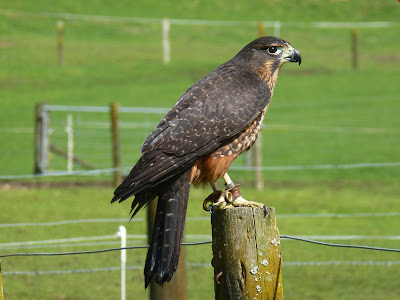 Interestingly, we were told that a professional photographer came to their center to take pictures of one of their New Zealand falcon specimens as a model for designing a new issue of the NZ$20 banknote scheduled to be released in April 2016. After the show, I went and asked which falcon was photographed. I was told it was a female named Shaheena Tetsuko. So we went to the cage where she was kept to admired her. How cool is that to have the chance to see in person the animal that will be printed on millions of banknotes? On top of that, Shaheena has an interesting backstory, see below.

On the last day in Rotorua we went for a short walk in the Redwoods - Whakarewarewa Forest. 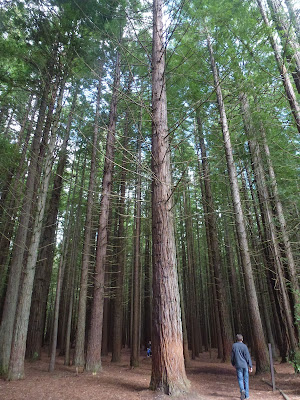 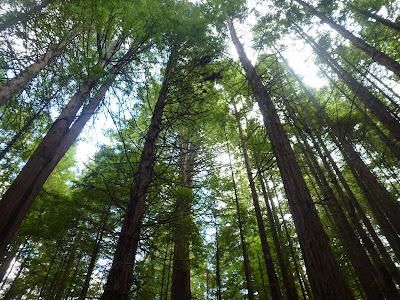 This was followed by having a pizza on the shore of Lake Rotorua where we saw black swans. 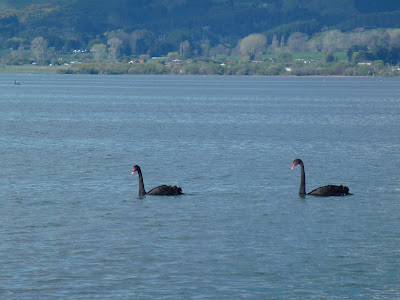 And since we stumbled upon a very small fair with an inflatable obstacle course, we concluded the day with 2 races through it between Lauren and I. She was more agile and won both times :) 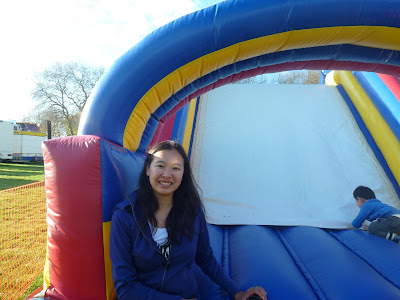