On September 12, we flew from Brisbane to Cairns to visit the Great Barrier Reef for 4 days. We ended up staying in an Airbnb in Edge Hill, which was a cute little neighborhood near the botanical gardens (though farther from the downtown). This sounds silly, but I did laundry with a clothing line for the first time! Whoot.


To mix things up, we booked two dives with two separate companies. The first company was Deep Sea Divers Den, and it really was quite terrible. It was a weekend day, so there were a ton of us crammed into the boat, tripping over each other's bags and gear. We had signed up for three introductory dives, and since we aren't scuba certified, we went down with a diving instructor. Unfortunately, four of us had to hold on to the guide's arm the entire time while underwater. So we were stuck slowly cruising through the water at awkward angles, so that we didn't kick each other. We contemplated not even going back in for our last dive, since it was cold and we were not really feeling it. In the end we opted to go —admittedly it was good to push our comfort limits.

The next day was comprised of mostly relaxing, working on job applications, blogging, and organizing photos. We also spent a lot of time petting our Airbnb host's cat who hung out outside our door most of the day and the night. I think she was lonely and needy, since the owner was out of town.

Our second diving day was with Cairns Dive Center, and it was like day and night. There weren't many people on board, the dive instructor was very thorough in his instructions (e.g. "don't punch the nemos", haha), the gear was newer and better. We went on two dives with the instructor and one other diver. For both dives, the instructor was still guiding us carefully, but we didn't have to hang onto him, we were free to just follow after him. We even saw a sea turtle, who didn't seem to mind us at all. The reef is beautiful with much more colorful coral than the Maldives. It felt like swimming in an aquarium. 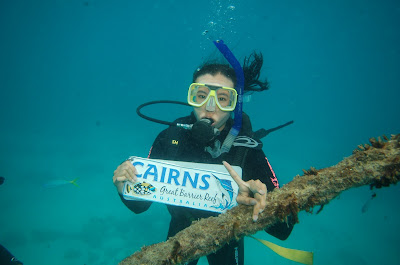 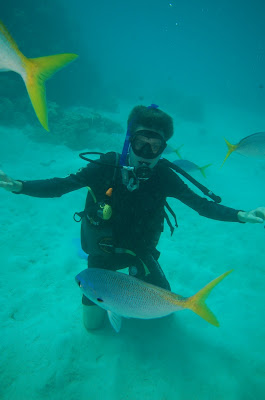 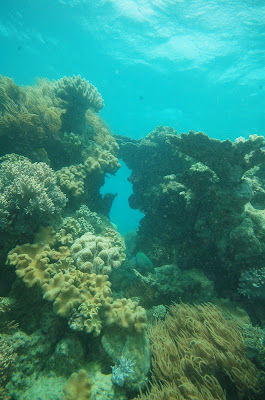 The following day, we relaxed again and checked out the Cairns beach front area. We were there at low tide, and the tide must have gone out 100 m / 300 ft, and so the whole beach was mud.