On September 2, we left for 5 days in the Blue Mountains, a mountain range near Sydney that we wanted to visit to get a feel of the countryside of Australia. We stayed at an Airbnb accommodation that was a little guesthouse in a backyard, with a bathroom that was clearly a DIY expansion to the main building and had the particularity of being outside and unheated —this was fully disclosed in the Airbnb listing, but we chose it to be a little more adventurous. On the plus side, this was cheap and we were located right in the Blue Mountains, in Wentworth Falls.

On our first day, we went on a very short stroll in Leura to visit Sublime Point: 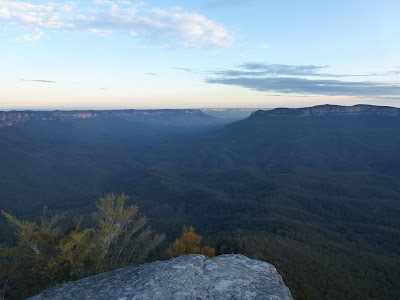 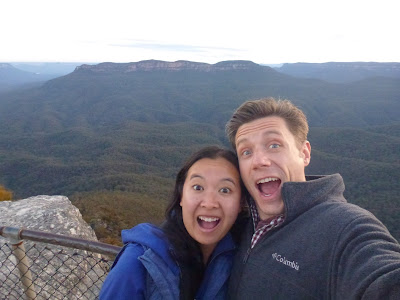 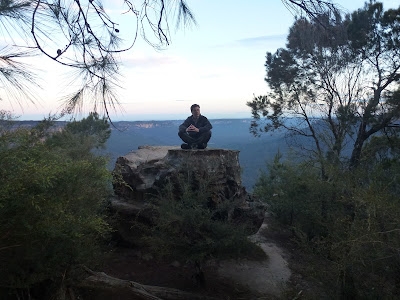 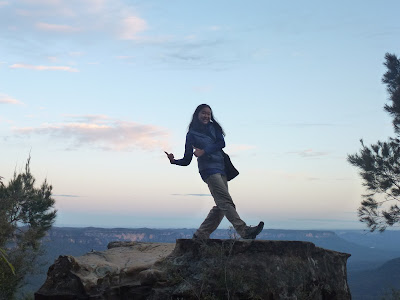 On our second day, we went abseiling and climbing near and around Boar's Head, with the Blue Mountain Adventure Company. This was a very cold and windy day, close to 5⁰C / 40⁰F, because of the elevation (around 900 m / 3000 ft). Despite wearing 7 layers, Lauren was still shivering with cold. We abseiled in the morning: 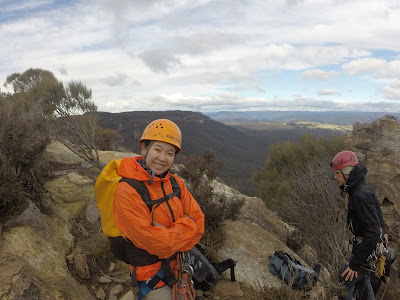 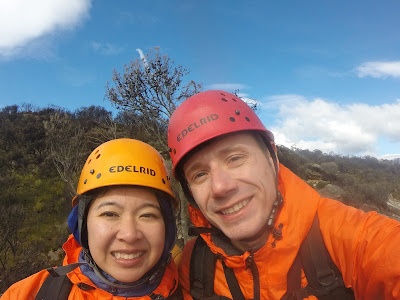 We stopped mid-day at the bottom of a cliff for lunch and hot tea, prepared by our guide who had a camping stove. We continued the day with climbing. Since it was just the 2 of us plus our guide, for safety he would climb first with both of us belaying him (he trusted us, wow!), then he would anchor himself and had us on belay as we climbed. We followed this procedure in 2 stages, stopping halfway on a ledge on the cliff. As Lauren and I were waiting on the verry narrow ledge, our guide took a few steps to the side to take pictures of us: 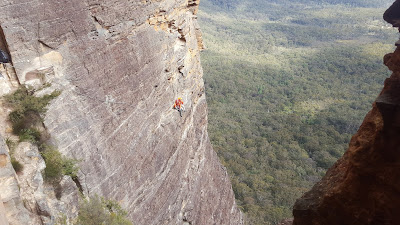 On the next day, we went to the Echo Point lookout from which we admired the iconic Three Sisters, a formation of 3 prominent rocks. Then we hiked (or bushwalked, as Aussies would call it) down to the first rock formation, and in the Jamison Valley. We were not quite sure if we wanted to hike up from the valley, but we heard from other hikers there was a railway going up the mountain, so we decided to check it out and discovered it was the Scenic Railway, the steepest one in the world with an incline of 52⁰ (each carriage has a switch so that riders can adjust their seat inclination for an extra +12⁰ = 64⁰ —this option is labelled "cliffhanger"). The tracks were originally installed in the 19th century for a coal mine, but it was retroffited as a tourist attraction. We also discovered 2 cable cars in the same area (Scenic Skyway, and Scenic Cableway). These 3 installations are part of the Katoomba Scenic World. Since a one-way ticket for the railway costs almost as much as a day pass for all 3 installations, we bought the day pass and entertained ourselves by riding the railway and cable cars a bunch of times to take a lot of pictures :-)

What I will remember the most of this visit of the Blue Mountains, is taking part in a 2-day bush survival course from High n Wild. Our instructor was really awesome and had an interesting background. He had previusly attended a survival class where he and 4-5 other students had to spend 6 months by themselves in the wilderness, each building their own shelter, searching for their own food, etc. In order to get a head start, he arrived on site 2 months before the other students. As he told us, an important skill in survival is learning from trial and error, so when he or other students had questions their instructor was sometimes purposefully giving them cryptic answers.

But in our case, 2 days gave no time to learn from trial and error, so our course was very straightforward. There is so much I would like to write, but I will have to keep it short.

Aside from the learning, we explored local caves. Some passages were so tiny we had to crawl on our stomachs. The entrance of one of the caves was full of thousands of tiny flies so we closed our mouths and moved through quickly, ugh!

The area was full of aboriginal hand prints, but we were not quite sure whether they were authentic or not. Our instructor seemed to think they were fake, which is apparently not so uncommon.

We slept outdoors, on a mat, slightly under the overhang of a cliff.

On the second day, we began a canyon walk through a wet canyon. It was quite challenging, with flat rock surfaces with moss or algae extremely slippery.

All in all, I very highly recommend this survival course. If you are a MacGyver type of person, you will love it.

Finally, on our last day in the Blue Mountains, we visited the Wentworth Falls, which were very beautiful. A pathway was carved on the side of the mountain, where a handrail is the only thing that prevents you from falling 100 m / 330 ft into the valley. 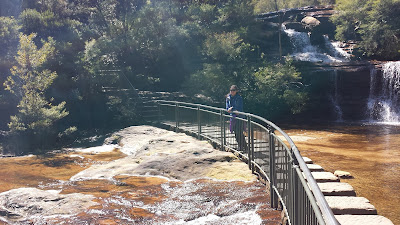 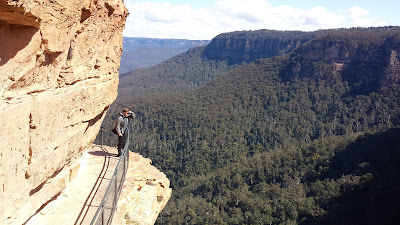 Next up, trip up the coast to Brisbane!
Posted by Unknown at 10:30 PM