On September 23, we took a 3-hour drive from Auckland to the northern part of New Zealand, the Bay of Islands, a beautiful bay full of, well, islands. We went on a day cruise to see and potentially swim with dolphins.

As soon as the catamaran left port, we spotted a local group of bottle nosed dolphins that the guides knew very well. They swam around the boat for a while, and a baby even swam in front, riding the waves. 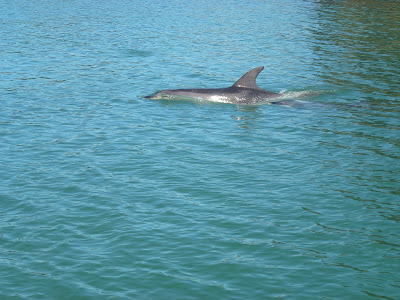 We weren't able to swim with them since they had young calves, but it was cool seeing them nevertheless. We also saw some extremely shy little blue penguins.

Around mid-day, the boat was anchored in Cable Bay by Urupukapuka Island. A little zodiac took us to the shore to explore this sheep-covered island, which is the largest in the bay.

The next day we drove south, passing Auckland, all the way to Waitomo to explore the famous Glowworm Caves. There are numerous caves in the area, many of them are owned by farmers leasing exclusive access to them to various caving companies. We went with Waitomo Adventures, on their 7-hour Lost World Epic tour (a great suggestion from Lauren's grad school friend, Amy!), which starts with a gigantic vertical opening in the ground called the Lost World, then we walked, climbed, and swam (upstream) in a wet cave for the rest of the day. Once again we were very lucky because this tour is usually organized for up to 8 people plus 2 guides, but it was just Lauren and I so it was like having a private tour!

My favorite part was the guides asking us to turn off our headlamps, then in the complete dark we walked in neck-deep water for 10 minutes, trying to find our way forward by following one of the cave's walls. During all this time, the guides were silently following us to see if we would "make it". And yes we did, until the point where we reached a small waterfall called "the washing machine" where headlamps were needed to climb it.


While in Waitomo, we spent the night at the Waitomo Caves Hotel, a presumably haunted place. Alas, we did not find any evidence of ghosts, but instead our nights were disturbed by very loud hotel guests running, laughing, and slamming doors in the middle of the night. Unfortunately we also skipped an hour because of daylight saving time in New Zealand, so we did not get as much rest as we would have wanted to. Oh well.

Next stop: the Hobbiton movie set and Rotorua!
Posted by Unknown at 6:14 AM