We made it to New Orleans: 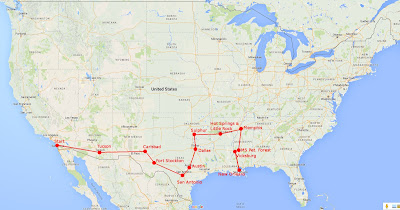 We arrived via Interstate 55, taking the Manchac Swamp Bridge (one of the longest bridges in the world), which goes through the swampy region of the Mississippi delta:


New Orleans is our favorite city of this RV trip so far. Its architecture is beautiful, and people are very friendly. Definitely a very unique city: 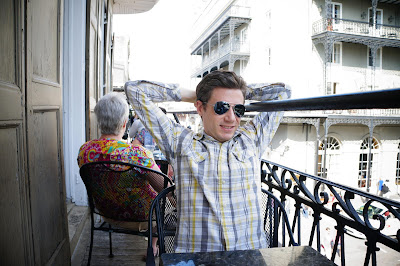 We went on an air boat tour to explore the swamps: 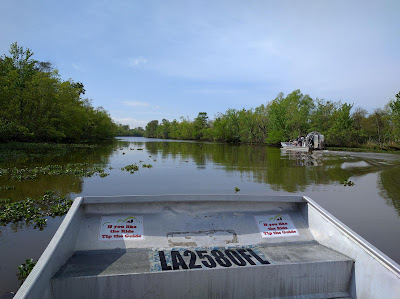 Here is the best part: the captain from another boat spotted an alligator and went bare-feet in the muddy waist-deep water to grab it with his hands and let us hold it! This alligator was about 3-foot / 1-meter long and was about 1.5-2 years old. Alligators this young are not that strong, and at this time of the day (late morning) they were somewhat lethargic because they were not sufficiently warmed up by the sun, so this made it apparently safe enough for us to handle them: 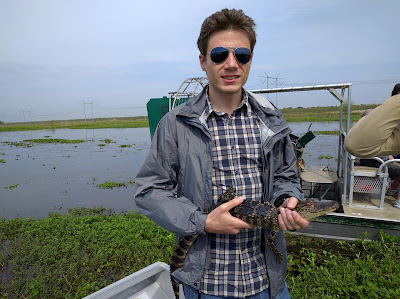 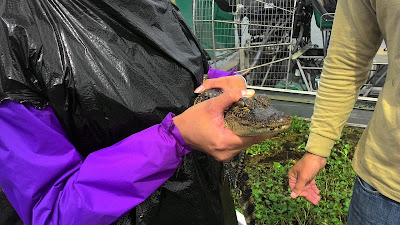 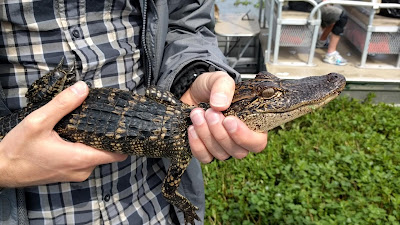 The guide also managed to grab a much smaller and younger alligator, this one was about 1-foot / 30-cm long and 6-month old. It looks like a lizard with a big head: 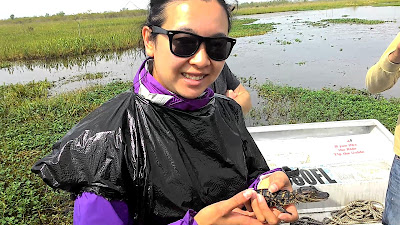 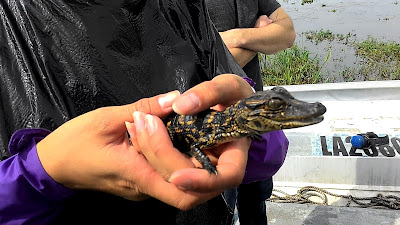 We visited the Garden District which has superb mansions: 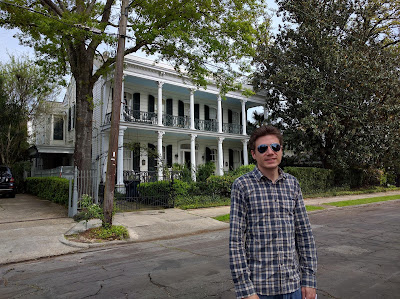 When trying to leave our RV camp in New Orleans, the engine failed to start. Thinking it was a dead battery, a staff from the camp was nice enough to come and try to help jump start our RV, but it was not working. It was raining, a Sunday, and Easter Day :-( Our insurer's road-side assistance service offered to tow us somewhere, but there was no mechanics shop open this day. So we reluctantly decided to spend an extra day staying in our spot in the RV camp. I continued trying to diagnose the problem and found out later in the afternoon it was due to the ignition switch that had bad contacts that burned out due to excessive load. As a temporary fix, I cleaned them and bent them to make better contact and was able to start the engine, it worked! Apparently this is a known problem due to RV body manufacturers putting more electrical accessories on the ignition wire than the chassis manufacturer specified. By this time it was too late to start driving to our next destination, so we still spent an extra night in New Orleans. The next day we were able to drive out to buy replacement parts, I replaced the connector, and an auto-mechanic replaced the switch (a PITA compared to replacing just the connector). Finally, all worked out.

Next stop: Alabama!
Posted by Unknown at 6:16 PM