We arrived at our hotel in Yangon on November 9, which was the day after Myanmar's historical general elections! I was pretty excited about witnessing a country having truly free and democratic elections for the first time in 50+ years. However, Lauren was nervous there could be demonstrations or protests. At the time Aung San Suu Kyi's party was expected to win, but the results were not known until a few weeks later. (Spoiler alert: Her party did win.)

Everything went fine. There were no protests. A few of our taxi drivers happily chatted with us about the elections and proudly showed us the indelible ink on their fingers. We saw posters of Aung San Suu Kyi around the city, in shops, etc. 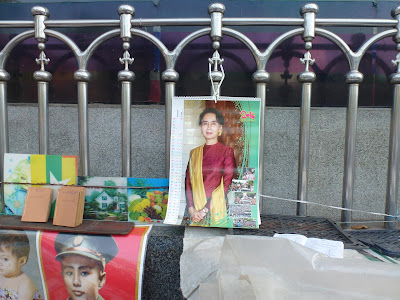 Two local customs that we discovered are the fact that many women —and some men as well— have pale yellow marks on their faces: a traditional cosmetic named Thanakha. And it is common for men to wear the longyi, which is a long piece of material tied around the waist.

We went on a walking tour around the downtown area:


The most important pagoda to visit in Yangon is the Shwedagon Pagoda:


We took a boat to get to the other side of the Yangon river to Dala, to explore the Baungdawgyoke Pagoda and a small town named Twantay:

Next stop: Bagan, Myanmar!
Posted by Unknown at 5:53 AM