Off to the Plain of Jars (near Phonsavan, northeast of Vang Vieng), a mysterious archaeological site that has hundreds of heavy and large sandstone stone jars scattered throughout a valley into clumps. Plain of Jars is dated to the Iron Age (500 BC to AD 500) and is one of the most important prehistoric sites in Southeast Asia. We saw site 1 and 2. It is not 100% clear what the jars were used for, or why there were so many clustered together. It is possible that they were used to store goods, and likely as burial jars since human remains have been found in and around the jars. Between 1964 and 1973, the Plain of Jars was heavily bombed by the US, and resulted in many jars being damaged and broken. The craters from the bombs are still visible.

Who were the people who made the jars? Why? When? We may never know.


Later that evening, we visited the UXO Survivor Information Centre. Highly recommend. During the war, the US dropped more bombs on Laos than it did in WWII! Many of these did not explode and continue to threaten people today. This organization works with individuals and their families who have been harmed when bombs exploded while they were digging in their fields, searching for scrap metal to sell, or burning trash. Many of the victims are just little kids. Most do not survive the blast :( We are still trying to figure out ways to support this organization.

We then took our car northwest to Luang Prabang, which took the better part of the day to bypass all of the random construction and very windy roads. Luang Prabang definitely had a more charming and quaint feel to it. In fact, the entire town center is a UNESCO World Heritage Site.

It is pretty hot outside but we decide to climb the trail to Wat Phou Si, which is a gilded statue on top of a 100m high hill. 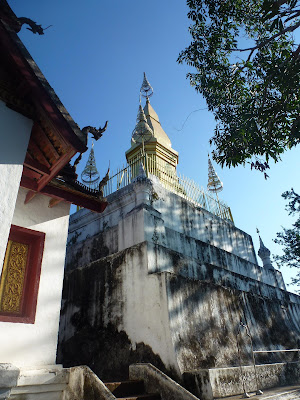 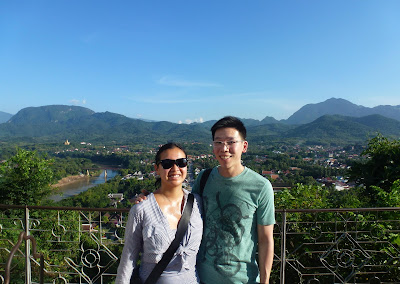 We passed by Wat Siphoutthabath and made our way through the night market which has tons of beautiful crafts and clothes for quite reasonable prices. We then ate at the night market food stalls where you can get all you can fit into a bowl cooked up for 15,000 kip, which is around $2.50. 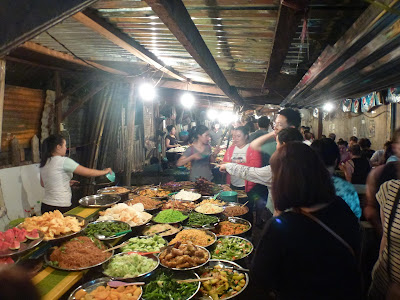 The next day we walked through the morning market which was right next to our hotel. 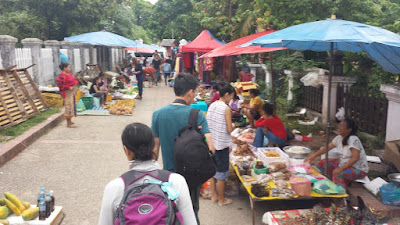 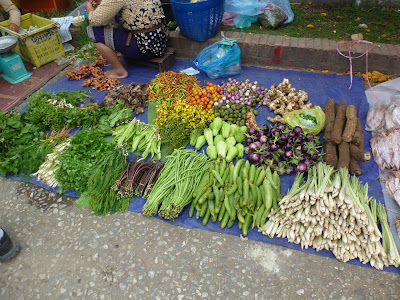 Then started the logistic nightmare as we tried to haggle ourselves a slow boat to go to Pak Ou caves. We were given the run around when we tried to book an amazing luxury boat, then we were bait and switched into booking a terrible boat--where we also found out we had overpaid compared to the other passengers. Finally, we banded with the other passengers, got a refund, and found a perfectly nice boat to take the 2 hour trip up the river.

The Pak Ou caves themselves are more of a shrine in natural caves. It was quite dusty and some parts are neglected. The upper caves were not lit so a flashlight was needed.

The following day we had booked a two day trekking tour to visit remote Hmong and Khmu villages with White Elephant Tours. The first days' trek was about 4-5 hours and we stopped in a village before heading to our homestay host village where we stayed in the house of one of the village leaders. 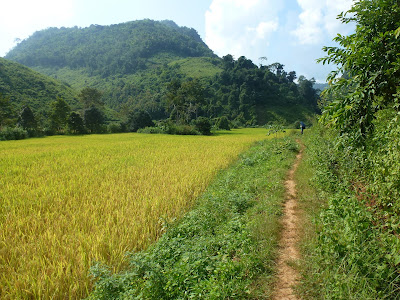 We stopped to rest at one point and our guide talks to a local farming family who are harvesting and bundling their rice field by hand using a curved knife. He encouraged us to give it a try. It was not as easy, the farmers work very hard.

When we arrived at our homestay village, a family was smashing soy beans into tofu paste using a manual human powered stone grinder. We helped out a bit, and it was also hard work. Our homestay was a basic room with mosquito nets. No electricity and the village well (one of two) was where people bathed, got water, and washed clothing.

The next day, we began the walk back to where we would get picked up. Curtis brought some chestnuts from Hong Kong to share with the kids, which they shyly accepted. 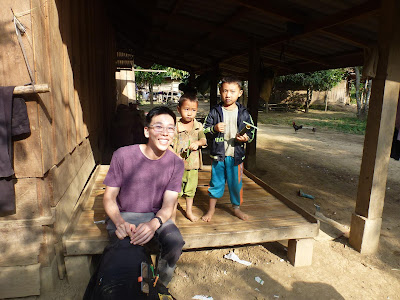 Just as we thought the trek was over, we came up to the last obstacle: fording a river that almost went up to our waits. Shoes and pants all wet! 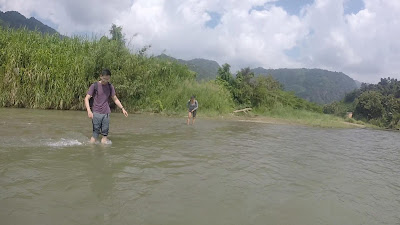 That night, Curtis and I caught a traditional dance show.