After Curtis parted ways from us on October 25, Lauren and I stayed a few more days in Luang Prabang, except in a different hotel. On that day we were supposed to wake up early to see the Buddhist monks taking part in their morning procession at sunrise through the city. Unfortunately we felt too tired (lazy) and decided to stay in bed.


We visited the Royal Palace, which is nowadays a museum, as well as the Haw Pha Bang temple on the grounds of the palace. The french influence in the palace interior was definitely visible. Unfortunately pictures were not allowed inside.


We went to the Kuang Si waterfalls, about 50 minutes from Luang Prabang. The area is designed such that in order to access the waterfalls you have to walk through Tat Kuang Si Bear Rescue Centre, which has nice enclosures with a small stream running through them, hammocks, tire swings, many tiered platforms for the bears to lay on. Most of the bears were just relaxing or sleeping. 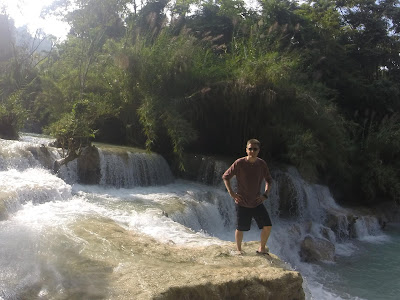 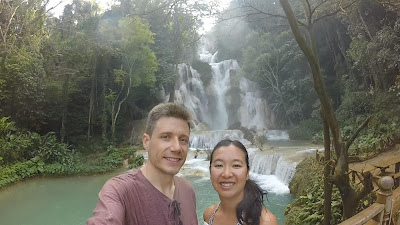 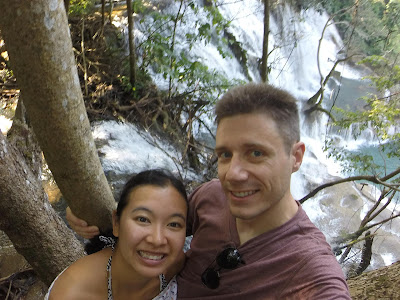 Lauren had the great idea to book a 2-day motorbike tour, with one night spent in a village. At the motorbike tour company office, we signed the paperwork, we put our gear on: helmets, jackets, gloves, boots, etc., then we proceeded outside to get our bikes (Honda 250cc) and our guide quickly briefed us on how to shift gears, etc. He seemed to expect us to start riding right away on the street, but we told him we needed some practice so he had us try the bikes just a minute or so each on a narrow street that was not even wide enough to make U turns. I felt barely confident (I rode a geared motorbike only once in my life, for less than 1 hour, and it was 20 years ago), but Lauren didn't. Apparently there was a miscommunication because we had told the company when booking we were total beginners, but the guide did not know.

We hesitated between cancelling the trip, or going with Lauren riding on the back of the guide's bike, but both options sucked. Eventually, Lauren suggested to find a better location to practice, until she felt more confident. The guide took us to a large grass/dirt lot just a few blocks away from their office that was perfect for practicing. So we rode here for about half an hour, until Lauren gained enough confidence to go on a bike by herself, yay!


At the end of the first day, we slept in a remote village no larger than a few dozen houses. It had barely enough electricity for 1 or 2 dim CFL lightbulbs per house. There was no tap water, just one pump with water coming from a spring for the whole village. Our house was a thatch roof wooden house with dirt floors. The dinner (and breakfast the next morning) was prepared by villagers. It was very similar to the village we stayed at when trekking a few days ago.

The second day was much like the first day: biking on dirt paths and on the road, back to Luang Prabang. The only time we felt unsafe on the bikes was when driving in the city in the crazy traffic.

We left Luang Prabang on a slow boat, navigating upstream on the Mekong, to Houayxay. This boat ride took 2 days. Although there was little to do on the boat, it was great to see the scenery, eat, nap, read, and relax. 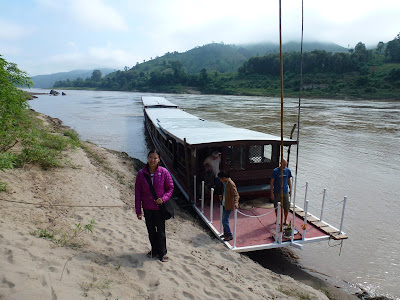 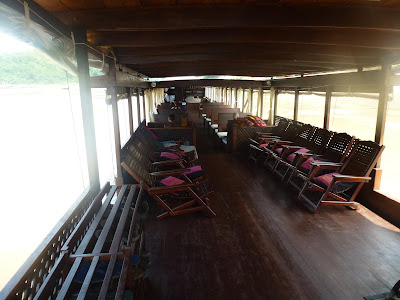 At the end of the first day, roughly mid-way to Houayxay, we disembarked at the little village of Pakbeng to sleep at a hotel. 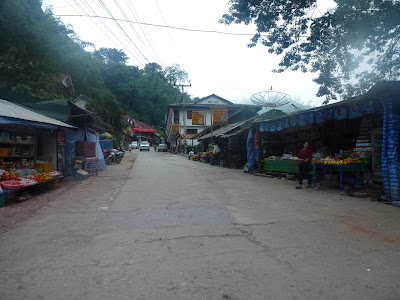 The town looks peaceful and sleepy, right? Well, surprisingly it was not. That night, October 28, was actually the celebration of the end of the Buddhist lent (Boun Ok Phansa), with loud music, dangerous firecrackers, fireworks, a procession of trucks and SUVs carrying hand-made decorative boats down the road to the river, etc.

The town turned into a crazy, loud, and unsafe place that night. There were unsupervised 5-year old kids holding lit fireworks with their bare hands and blasting fireballs in random directions, people throwing firecrackers on the road where the crowd was gathered, etc. When firecrackers bounced and landed near the crowd, people were trying their best to run away from them. I saw a woman with a bleeding cut on her leg caused by a firecracker, and taking refuge in the lobby of a restaurant. I too failed to avoid one which exploded 2 m / 6 ft away from me. I could actually feel the shockwave from the firecracker through my whole body, and a small piece of gravel hit my elbow and made a cut.

The rest of the night was more quiet, with people lighting flying lanterns and carrying the hand-made decorative boats to the river. 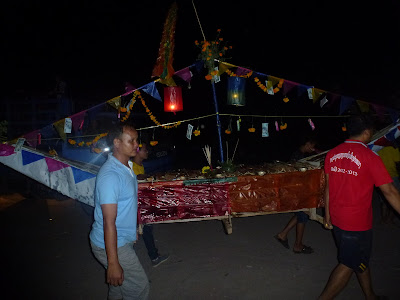 The next morning, we climbed back on the boat and continued on the Mekong, making a mid-day stop at a Khmer village, where we visited the local school, saying hi to the kids. 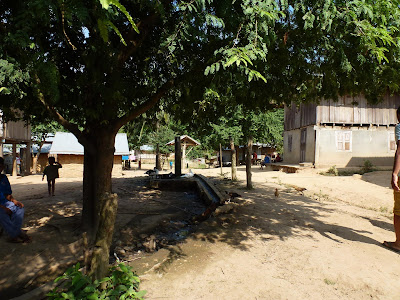 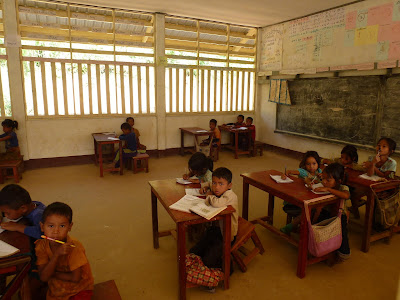 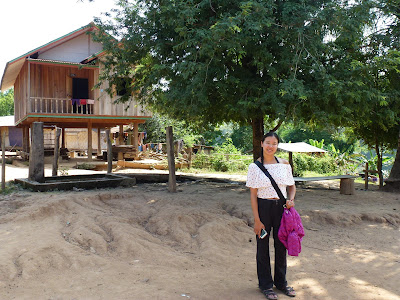 Eventually, as we approached Houayxay, the river becomes the border between Thailand (on our left) and Laos (on our right). We passed under Houayxay's friendship bridge, which is a border crossing. 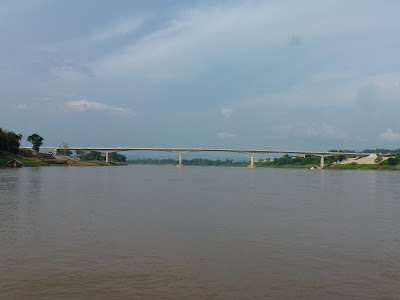 So why did we want to go to Houayxay anyways? We went there to go on the Gibbon Experience, a 3-day 2-night adventure in the forest, where we lodged in treehouses (supposedly the tallest in the world), ziplined, and hiked. I have good and bad things to say about this adventure.

The good:
The bad: 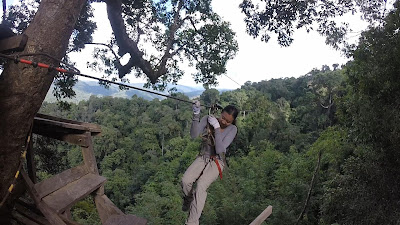 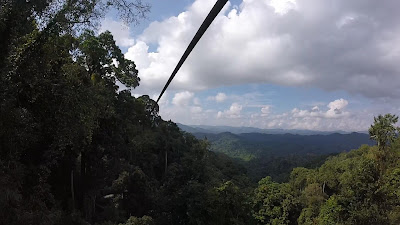 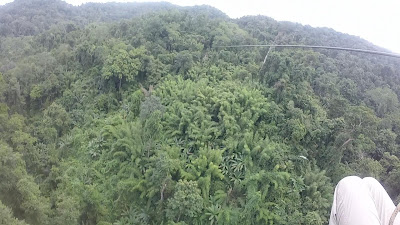 In summary, I would say we kind of liked the Gibbon Experience, but Lauren says this is cognitive dissonance (because we paid a lot of money for this tour). We will remember it as the "Mosquito and Leech Experience." We were glad to be back at the hotel in Houayxay after it was over, to take hot showers, and clean our clothes.

Next stop: Thailand!
Posted by Unknown at 9:20 PM