On October 5, we started our 3-day, 2-night hike on the Abel Tasman trekking trail in Abel Tasman National Park on the northwest side of the south island of New Zealand. In the morning, we rented sleeping bags and a large hiking backpack from Stirling Sports in Motueka. We had booked shared cabins along the way (which had filtered water), but needed to take all the food, clothing, and sleeping bags with us on the hike. Marc was such a gentleman and ended up carrying the majority of the supplies, while I carried a day pack. Even with his much larger pack, he was still a faster hiker!


The walk went up and down on a well groomed trail. The signs were clearly marked with markers showing the distance to next destinations. Most of the path is in the forest, with occasional viewpoints to see the water, and trails down to the beach. 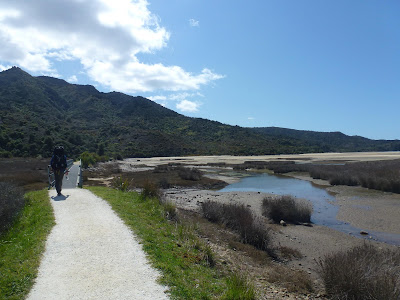 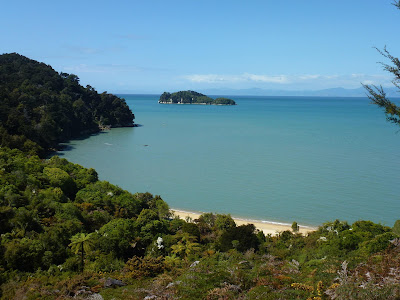 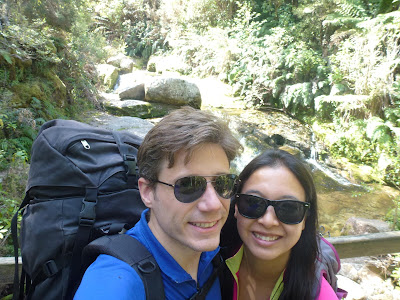 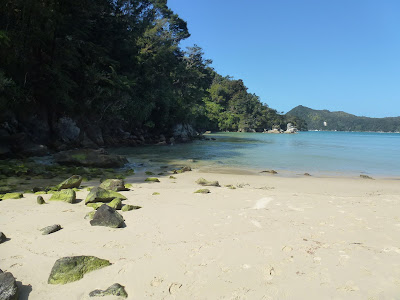 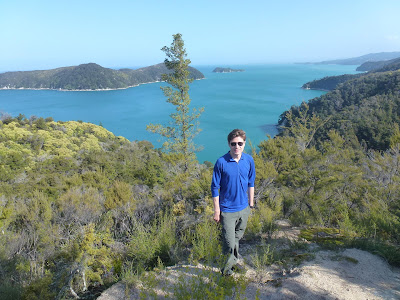 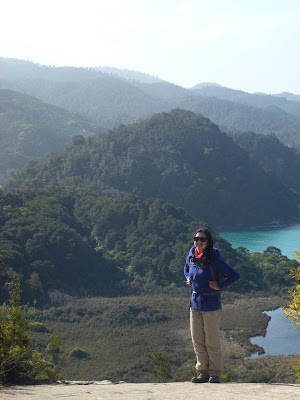 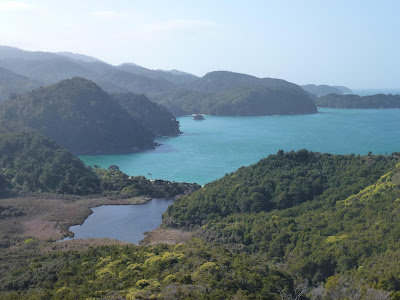 The distance between the camping points is only 4 hours, so we reached our campsite, Anchorage Hut well before sunset. It is a very newly built site (2013) with 4 bunk bed rooms with 8 spots each. There are also a clean bathroom and a large mess hall where people can prepare their food (no stoves or ovens, just counters), and eat at the picnic tables. 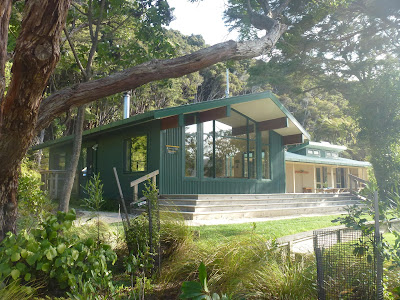 We used the skills we learned in the Australian survival course to build a fire to warm ourselves up (Marc uses his survival bracelet —not the best, but gets the job done). 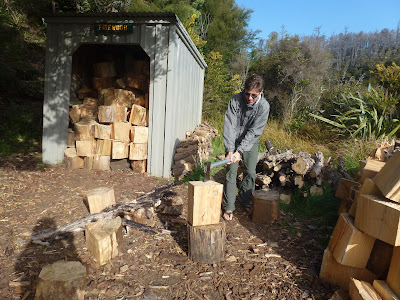 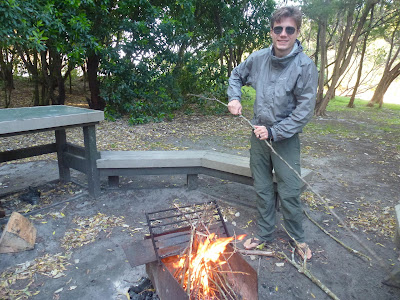 The next day, we woke up fairly early to catch the low tide, so that we could make our way across an inlet. Try as we might, there seemed to be no way around getting wet. 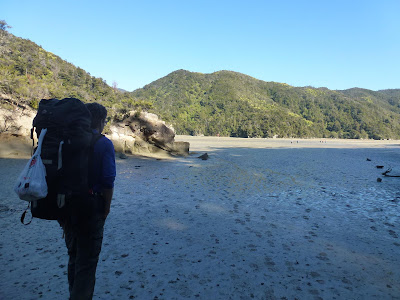 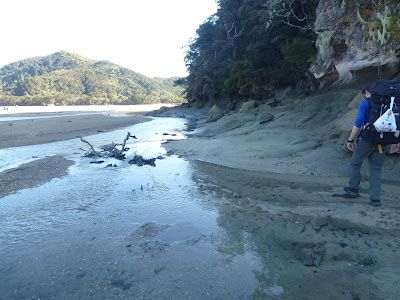 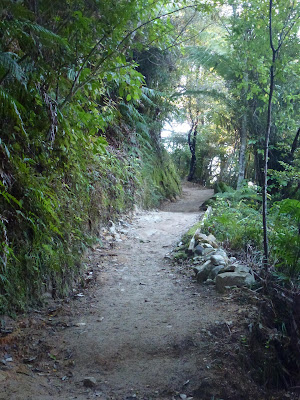 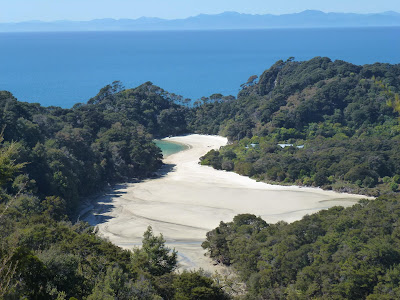 Because we had all day to hike just 4 hours, we frequently stopped by every possible vista viewpoint, and ended up spending hours on "Sandfly beach," which thankfully did not have many sandflies at the time. We did some boulder climbing on the rocks near the water and explored some little sand islands that ended up getting completely covered in the incoming tide. 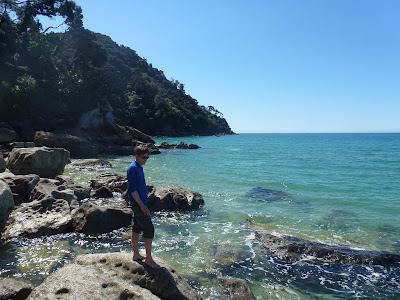 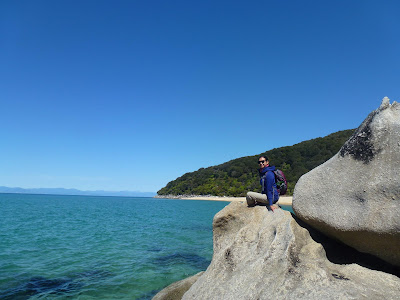 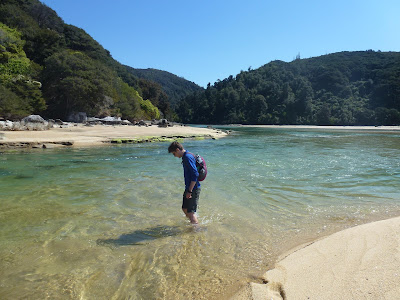 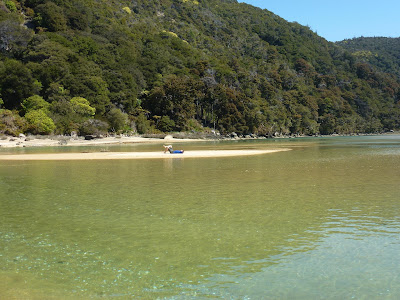 Finally, we made our way to the Barks Beach hut, which is older, and actually has a gigantic 8 person across bunk (oh togetherness). My pitiful dinner of cold soup drew sympathy from a traveling group of middle aged New Zealand ladies, who shared their delicious pesto pasta (Marc preferred his canned chicken, haha). 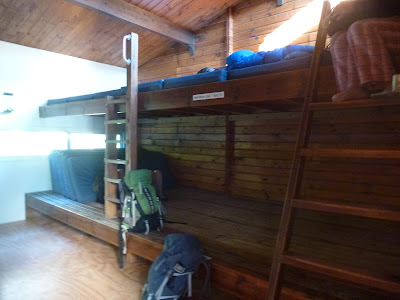 The final day of the hike we again woke up early to cross an inlet in low tide, while being attacked by many sandflies. 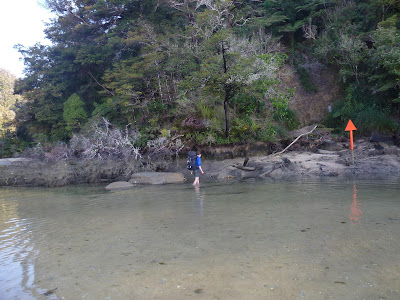 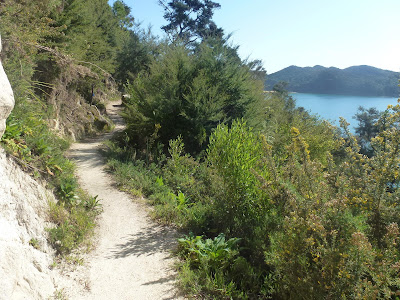 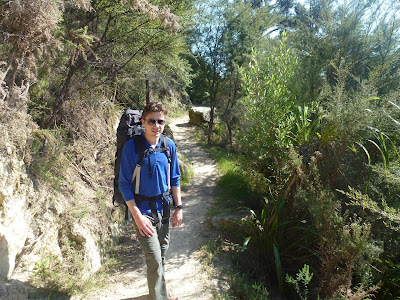 In the forest, there are large patches of black moss that seem to be growing all over the plants. Sadly, it appears to kill them. It looks like an evil presence from a movie. There are a lot of rat traps along the way, which we are sad about.

We end our hike in Aowrara where we had hired a water taxi to come pick us up and take us back to the beginning of the hike where we had parked our car. Interestingly, when we get back to the shore, a tractor is there, waiting in the low tide. The boat is floated onto the tractor's trailer and then driven onto shore and through town, it was quite a spectacle.

That same day, we dropped off our gear and drove down south to Murchinson. The next day we had planned to go river rafting on the Buller River with Wild Rivers Rafting company. It is still off season, so it was only the two of us and the guide (a badass guy named Bruce who had a viking beard and wore short sleeves on the freezing river). I was nervous going down the river (or rather falling in) since it started raining, was freezing cold and I am not the strongest paddler. The river was classified as a 3/4 grade. Because we were a very light boat, most of the rapids were us going up and down and up and down. The most dangerous rapid we did involved avoiding a series of "holes," in which the boat would likely turn over and you would get sucked down into it and possibly churned around like a washing machine. The path to the other side was riddled with these holes. We held our breath and miraculously came out soaked, but unscathed! 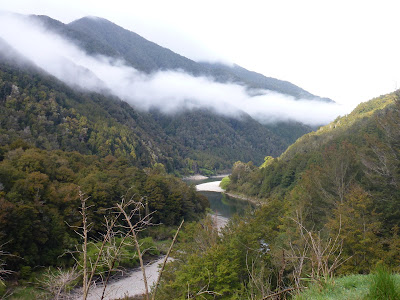 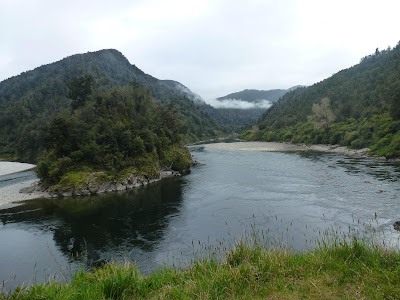 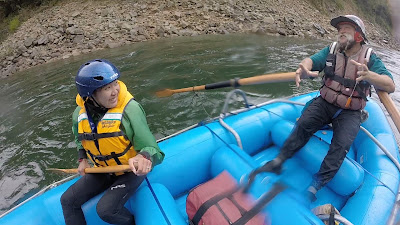 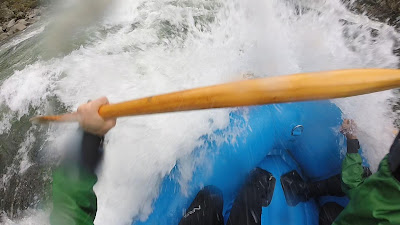 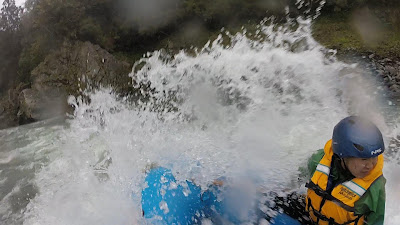 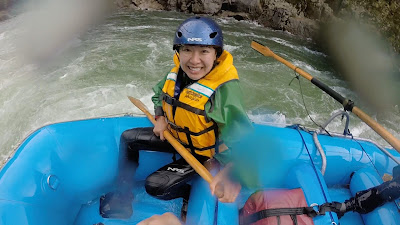 Near the end of the trip, Bruce asked us if we wanted to hit a rock. I thought this was a teaching moment and replied, "Of course not." But it turns out he was serious and actually did want to hit a rock. When I asked him why, he replied, "because it's fun." So we paddled full force into a rock and bounced off it, going backwards into the rapids. He was right, it was fun. Marc even tried paddling for a while. 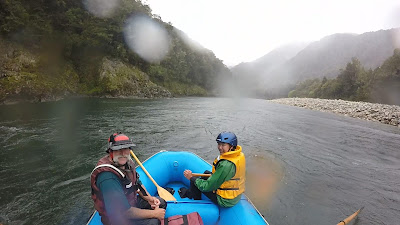 Next stop, Christchurch!
Posted by Unknown at 10:12 PM