I was going to start this post by explaining what marked me the most when arriving in China. Instead I'll mention the two things that were the most striking when leaving China:
Indeed, our next destination after China was Australia (as you'll see in a subsequent post), and I was taking pictures of the Australian sky during the cab ride from the airport because I was stunned with how blue it looked, after being acclimated to the permanent haze pollution we saw in China.

[Nerding commences]
As to the second point, China is well-known to heavily censor the Internet. The Great Firewall of China (GFW) completely blocks all Google websites (Search, Gmail, Drive, Maps, Hangouts, everything), the New York Times, Facebook, Chinese Wikipedia, etc. Being a computer and network security professional, as soon as we landed in China, I was excited to start investigating the GFW to test its capabilities and limits, and find ways to evade it. I ended up setting up a custom VPN that's basically an HTTP proxy with a TLS-encrypted browser-to-proxy connection, with a piece of code I wrote to pad network packets to a random length in order to prevent the GFW from detecting TLS handshakes within the TLS proxy connection (which happens when browsing HTTPS sites). This worked well at the hotel with my laptop acting as a VPN endpoint and WiFi hotspot for our other devices. When out during the day without my laptop, I just used a commercial VPN service (ExpressVPN) on the phone. But enough with such details; I will write a more technical post about the GFW on my blog in the near future. (Edit 2016-01-24: done, see write up.)

Even when the GFW can be evaded, it remains a big annoyance. The GFW adds some amount of network unreliability with connections timing out or resetting, and VPNs can add network latency in the hundreds of milliseconds, so web browsing is noticeably slower. Suffice to say I was pleasantly surprised to remember how fast the web can be after leaving China!
[Nerding ends]

On a different note, I was positively surprised by a few things when arriving in Beijing: this city is full of electric mopeds and scooters! They are everywhere, zipping on streets and sidewalks, rarely stopping for red lights, and honking the horn every few seconds to make their presence known.
Gas-powered mopeds and scooters are so rare that I don't think we even saw one until our second or third day there. In fact, we decided to do a tour of the city on electric mopeds with Bike Beijing. Our guide told us they became popular starting around 2010, and people prefer them over gas-powered ones because the cost per kilometer is cheaper using electricity than gas.
Our tour lasted 3 hours, and the battery indicator was still showing 4 out of 4 bars at the end. Their top speed is about 50 km/h / 30 mph, and they were definitely powerful enough for a flat city like Beijing. According to our guide, this model costs only 2000 yuan / US$300. This amount of money barely gets you a decent mountain bike in the US...
The tour itself was great. We explored numerous areas of the city, between the north part of Beijing (staying within the 2nd Ring Road), down to Forbidden City and Tiananmen Square, which was the only place of the city where two-wheel vehicles seemed rarer.
We went again to Forbidden City on another day, but this time by foot:

Near Forbidden City, I was stopped on the sidewalk by a Chinese family. The father didn't speak a word of English, but was holding a camera. At first I understood he wanted me to take a picture of them. But after a few confused seconds I realized this is not what he wanted. He wanted to take a picture of me with his wife! I had heard about this phenomenon (where some Chinese tourists want to take photos with random White people), but I was surprised by it in the moment :)

Security is very tight at Tiananmen Square. Vehicles are not allowed to stop near it, even to drop off or pick up passengers:
On our 2nd day in Beijing, we learned of a morbid news: a Chinese and French newlywed couple has been stabbed in the city, in broad daylight, by a sword-wielding attacker. Apparently, the attacker wanted to "kill an American," which definitely hit too close to home. If Lauren's Mom had seen the news headline, she would have thought it would have been us!
On another note, we tried some street food such as, noodles or fried shrimps. There is a street near the Wangfujing area where vendors are selling more adventurous food: fried spiders, snakes, and scorpions. Yikes! 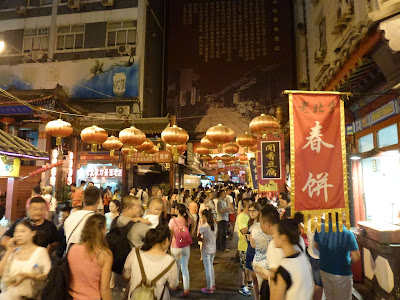 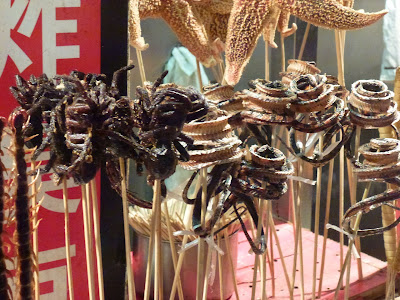 On August 15, we left Beijing for a 2-day 1-night camping trip on the Great Wall. There were 7 of us, plus 2 guides. We rode in a minibus to the north east of Beijing on the Jingcheng expressway.
From what we saw, people appeared to treat the expressway emergency lane as if it was a rest area. They parked their cars on the lane, and passengers were hanging out around the vehicle, right next to high-speed traffic. Alarmingly, some vehicles (including police cars!) also drove in the emergency lane as if it was just another lane.
Speaking of road safety, in Beijing, none of the taxis we rode in (and we rode in a lot of them) had seat belts in the back seats. Scooter and moped riders didn't wear helmets. According to the WHO, road fatalities statistics are 21 death per 100,000 inhabitants per year in China (though this is more than four times what the Chinese government report, for reference US is 10 per 100,000 per year).
Anyway, we survived the drive and arrived at the Great Wall at Jinshanling shortly before noon. There are quite a few poetic signs around this area. 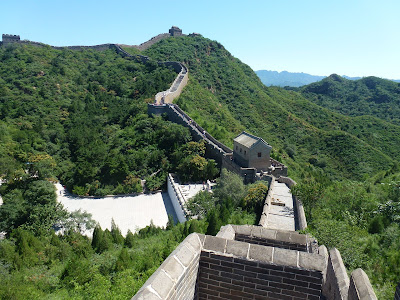 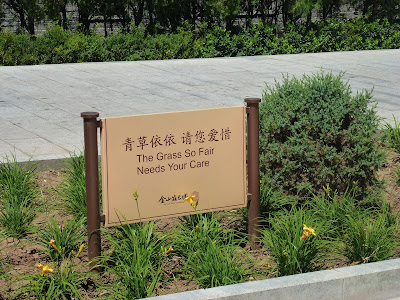 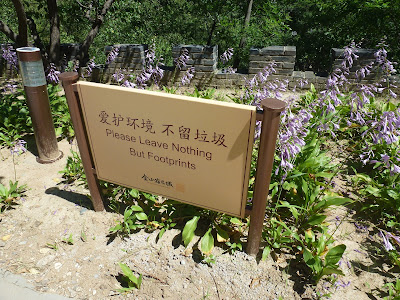 We started the hike on the wall itself, on a section that was beautifully restored and looked exactly like all the pictures you find online. Then we quickly reached unrestored sections, where grass and small trees are growing on the crumbling wall. 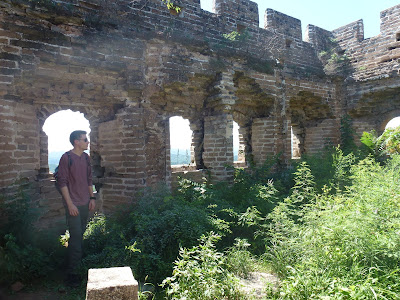 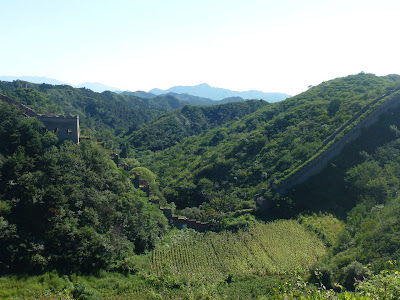 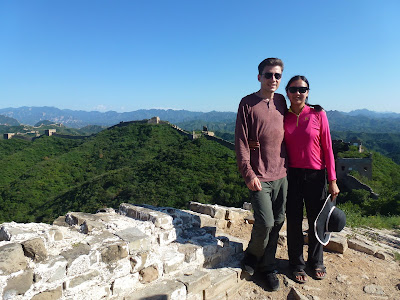 We stopped for lunch at a local farm where the owners rent rooms for hikers and also serve lunch.
In the afternoon, we reached a point where we couldn't continue on the wall: it was closed with barbed wire because the wall itself is used as the fence of a military zone. So we had to walk alongside the wall for a little while before getting back on it.
At sunset, we again stepped off the wall to set up our tents on a ridge near it. We ate a meal prepared by another local farm, and spent the rest of the evening around a bonfire, looking at shooting stars, talking about everything from pop culture to astrophysics. 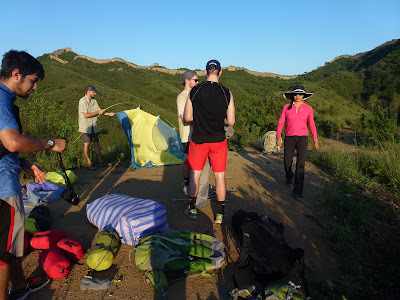 After a good night of sleep, we ate breakfast and strolled through a village of a few dozen houses, with chickens roaming freely, and pigs in enclosures alongside the main road. Somewhat surprisingly, some houses were equipped with roof-mounted solar water heaters: 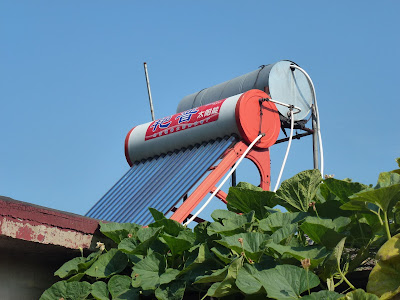 The next day we visited the Summer Palace, located on the northwest outskirts of Beijing. There are so many gardens, palaces, and a large lake, and yet it felt very crowded. So many tourists! 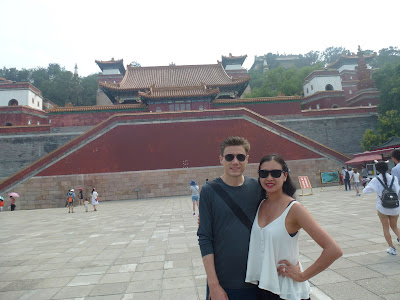 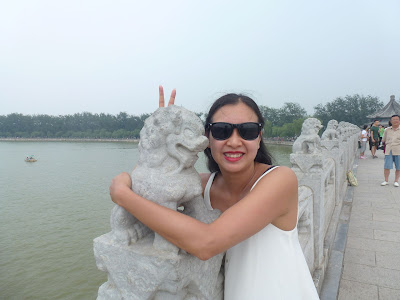 We decided to eat at Pizza Hut that evening. Actually, our Great Wall guide had told us the day before that Pizza Hut operates differently in China than in North America, so we tried them out. Step into one of them and you will find a nice, clean-looking restaurant serving a wide variety of decent food. I would compare it to The Cheesecake Factory in the US. Only 3 of the 20+ pages of their menu are pizzas.
Off topic: I love seeing these sort of things: on the doorstep of the Pizza Hut was a 12V battery hooked up to what seems to be a 8V-5V DC-DC converter to power an audio player advertising the place. I love the hacker side of the Chinese people :) 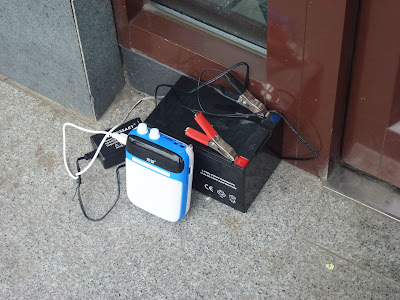 This concludes our week in Beijing. We are now heading off to Shanghai. To be continued...
Posted by Unknown at 4:53 AM