On August 19, we boarded a plane from Beijing to Shanghai. Although I didn't mention it in the previous post, it was good timing to not stay much longer in Beijing because of the catastrophic explosions that took place a few days earlier in the nearby city of Tianjin (100 km / 60 miles away). The explosions released sodium cyanide and other chemicals in the atmosphere, and they could have been carried to Beijing with wind and rain. We didn't trust guidance from the Chinese authorities who downplayed the accident and didn't release much data (even the US Embassy in Beijing was unhelpful, saying in an online alert "we have no information other than that which has been provided to the public by Chinese authorities"). So we were monitoring wind direction ourselves every day to make an informed decision about whether or not to shorten our stay in Beijing. In the end, wind was blowing in the north / north-east direction, carrying potentially polluted atmosphere away from Beijing, so we decided not to change our plans.

Shanghai looks a lot more modern than Beijing. Traffic is less crazy. Taxis have seatbelts in the backseat :) Overall, it's a city that has more of a western feel to it. On our first day here, we visited the central part of Shanghai: The Bund, from which we can (sort of) see the famous Pudong skyline.

The Yuyuan Garden were one of the few historical places we visited in Shanghai. The picture below does not show it, but it was really crowded with people all around us. 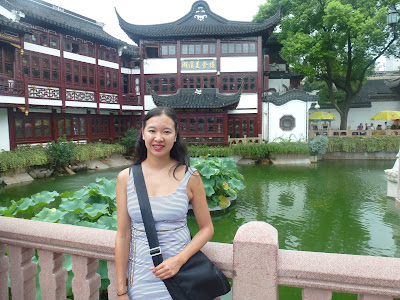 We went to the Pudong district, home of some of the tallest skyscrapers in the world:

The Shanghai Tower actually has the world's highest observation deck (561 m), higher than Abraj Al-Bait Clock Tower's deck (558.7 m), and Burj Khalifa's deck (555.7 m). Why the Burj Khalifa, the tallest by far, would put its observation deck almost 300 m below its top has always puzzled me... Anyway, the Shanghai Tower is scheduled to open to the public any time now. But unfortunately it was still closed when we wanted to visit it. So we went to the Shanghai World Financial Center (SWFC) instead.

Fun fact: the day we visited SWFC, we learned that three foreigners were blocked the day before from illegally climbing the Shanghai Tower. They were caught because of pictures they posted on Instagram of themselves climbing other buildings in Shanghai, like this one and this one.

One night, we contemplated going to the movie theater to see a Chinese romantic comedy called 新娘大作战 (Bride Wars), a remake of the 2009 American comedy of the same name. We would not have understood the dialogue, but being a comedy we may have been able to at least follow the general plot and perhaps even laugh at some slapstick jokes. But in the end we decided against it and just went with a safer choice: Terminator Genisys.

Finally, we attended a Dim Sum cooking class to learn how to make Xiaolongbao (a type of steamed bun), and a sweet coconut-flavored soup-like desert (well, not a soup but we forgot the name). The instructor did not speak a single word of English, and none of the students spoke Chinese except one girl. We could somewhat understand what the instructor wanted to communicate with hand signs. But for more complex instructions, she spoke to the Chinese girl, who could translate to Spanish for her husband, who then translated it to English for us. It seems nothing got lost in translation, and the end result was edible! 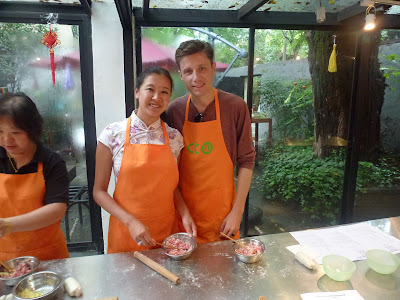 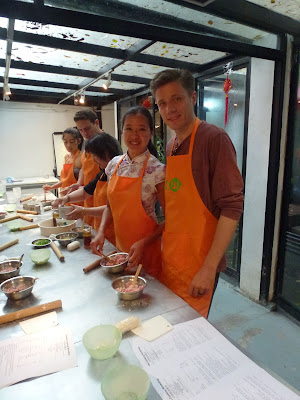 Next stop, Suzhou, China!
Posted by Unknown at 9:48 PM