June 22: Wed
Mostly a travel day to fly from the Maldives to Kuala Lumpur. On the flight, as we were about to take off, I felt a tap on my arm. A Muslim woman across to aisle seemed to want to ask me something. She didn’t speak much English, but managed to convey that she was scared of flying and wanted to hold my hand. I was surprised, but honored. Then throughout the flight when there was turbulence, she would reach across the aisle and I would hold her hand until the turbulence ended. She thanked me when we disembarked, it was sweet.


Since we did an overnight flight, we arrived at around 8am, which was too early to check into the hotel, so we ended up falling asleep in a Starbucks in the mall. Ah well.


After a nap, that evening we went out to see Butik Bintang, which is a major shopping street. Kuala Lumpur seems to have an interesting mix of both very upscale malls and street vendors with new construction everywhere. Walking around is hectic since the streets are crowded, it is 80-90+ degrees with high humidity, motos ride close to sidewalks or even on side walks, double parking is the norm, and jaywalking is a necessity. Even in upscale malls, the cost of food is really affordable, with our yummy dinner costing only $2-3 per person!
Took the pedestrian walkway to Petronas Towers. They are magnificently lit up at night. 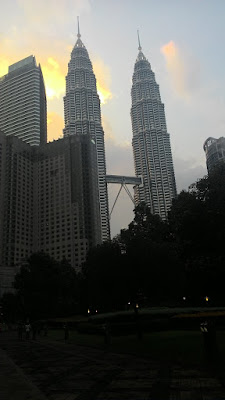 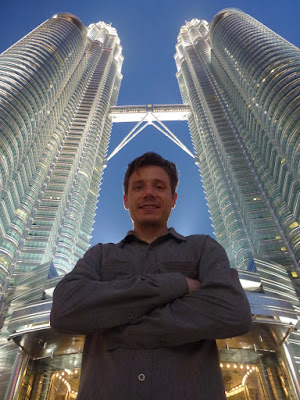 July 23: Thurs
We take the hotel shuttle to the Kuala Lumpur Bird Park, which is one of the largest open air aviaries in the world. My personal favorites are the lorikeets, who are crazy about honey nectar.

We taxi to a large indoor bazaar called Central Market, and walk through the vendor stalls of Chinatown.

July 24: Fri
We browse through a mega mall called Time Square (12 stories high, the largest we’ve been to!) and make our way to the Batu Caves.
It is a Hindu site in a natural cave with a 140 foot tall gold statue and mischievous monkeys patrolling the many steps to the top.
Looking up, the cave has beautiful natural formations and green foliage, but the ground floor has vendors inside the cave, the floor is paved in concrete, and there is random debris everywhere. 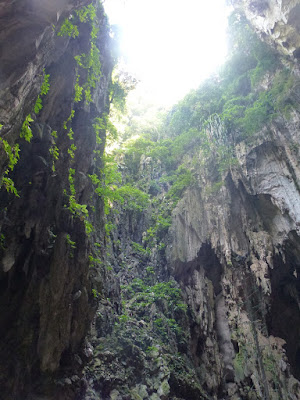 We decide to take a Dark Cave Tour, which is an eco-educational tour of the other sections of the cave. You can hear the bats on the ceilings, and apparently they have one of the most rare spiders in the world (Trapdoor spider of Malaysia), sadly only 200 or so left.
For dinner we eat in Jalan Alors, a street which is a bustling night street food scene. The choices are overwhelming, but we end up at a kebab place where they deep fry your food on the spot.
There are several street performers there who have severe handicaps, some in wheel chairs, some walking by on their hands and singing songs into microphones. One young man with crippled legs makes me cry. We resolve to give at every possible instance, it’s the least we can do. It also makes me remember why I got into health research in the first place, and reminds us to be good stewards of the resources that God has given us.