Shortly after landing in Hong Kong we met up with one of my good friends, Dr. Curtis Yee, our official guide to the city. He was even gracious enough to let us stay with his parents in their super chic high rise apartment!

Once in the city, we were escorted to an "abandoned" amusement park/county fair that was in Central Hong Kong. We walked around the midway games and noticed a jazz band setting up on a colorful stage. To our utter surprise, Curtis jumped up on the stage and played the drums for the band, despite only having had a few months of lessons. He even sang a Frank Sinatra song.


We grabbed a bite at a famous HK diner and then walked around the club scene in Lan Kwai Fong.
I certainly felt old since all my jams are from the 90s. We went for a quick drink at a posh bar called Post 98.

Day out with Curtis! We start out with Hello Kitty dim sum. Yes, that is correct. It wasn't the tastiest dim sum, but it was certainly super cute. 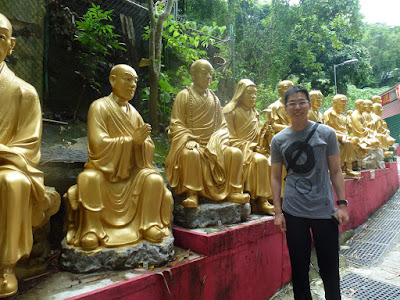 We then see an exhibit on one of HK's most famous celebrities, Bruce Lee! We watch a strangely edited documentary on his life and learn that he was a goofy prankster as a kid. We also visit the Wong Thai Sim Temple. 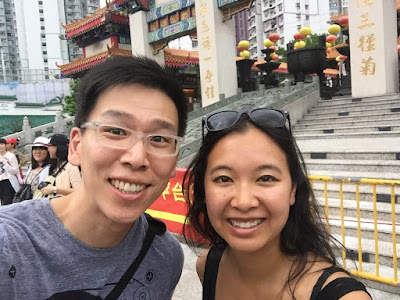 A fun trend in HK is to take polaroids with street photographers. 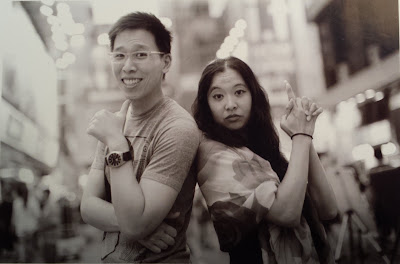 We meet with a few of Curtis' friends for dinner and desserts on Temple street. 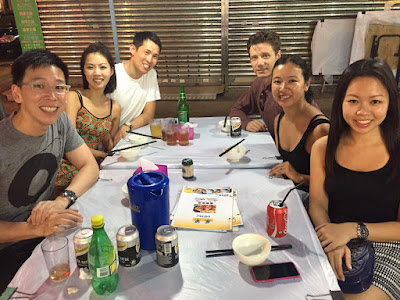 While I spent the day with Curtis, Marc explored the city by himself. In the morning he went to Causeway Bay, one of the most built-up area of Hong Kong (retail rents are the 2nd highest in the world at US$2735 per square foot per year). He walked along Hennesy Road, stopped at two popular computer centers to look at some tech gadgets and buy a portable phone charger. (Note from Marc: this charger turned out very useful, as I often configure my phone as a hotspot for Lauren during an entire day, and doing so drains the battery rather quickly.)

Marc was surprised to see many large groups of women sitting, sleeping, or eating together on the streets, sidewalks, and parks, often on cardboard boxes or sheets. Homeless women? No! Curtis explained to us later they are the maids of local residents who normally live in their employers' houses, but they have Sunday as a day off, so they hang out outside.

Asia wouldn't be Asia without giant robot statues in random places, and sure enough, Marc found one in one of the many luxurious malls in this area: 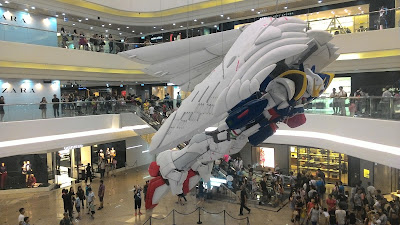 Marc and I start out the day with yummy dim sum at a chandelier clad restaurant called Maxim's Palace at the City Hall (highly recommend). We do a bit of window browsing at Causeway Bay (posh, expensive malls), PMQ (hipster boutique in a reclaimed police dorm building), and Hollywood/cat street (antique stores, mostly. But no cats!). 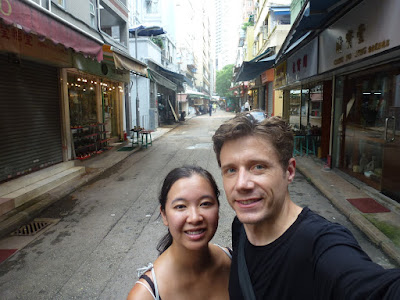 Then it's off to Victoria Peak, the highest mountain in HK, for gorgeous views of the cityscape. 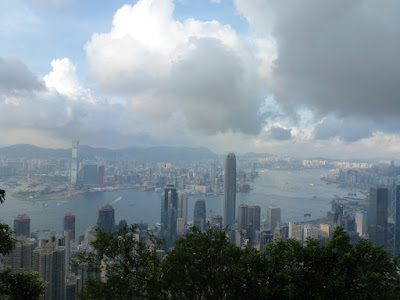 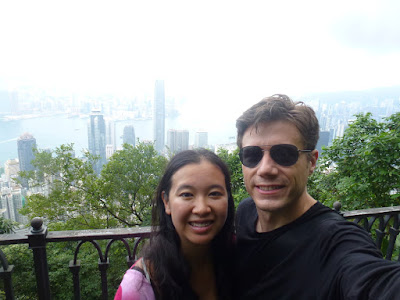 That evening we join Curtis to take a ferry across the bay to the Kwoloon side of HK to see the nightly building light show. It is impressively done, with many of the buildings lighting up to the music.

We enjoy an all you can eat Japanese restaurant called Kanada, and then take a walk to see the Avenue of the Stars (HK's own Hollywood Blvd).

Marc and I each do our own thing this day. Marc takes a trip to Dragon's Back, a fantastic hike on the southeastern part of Hong Kong island. He followed these directions. It starts off by getting off the subway terminus (Chai Wan) and climbing out of the city through a cimetery: 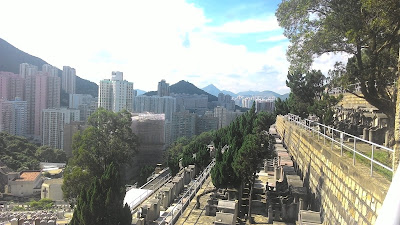 Then you end up on a small paved road in a forest: 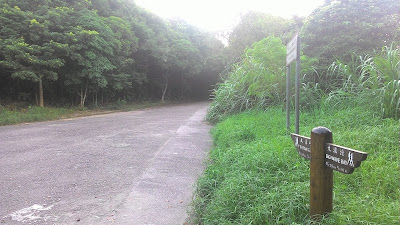 One clearing in the trees lets you admire east Hong Kong: 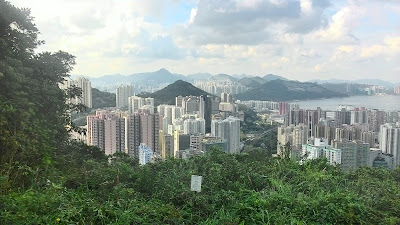 Eventually you reach a dirt path, and stairs where Dragon's Back actually starts: 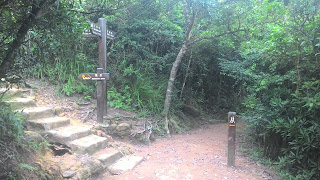 The hike is named this way because after the top of these stairs it follows the ridge of hills, as if you were walking on the back of a sleeping dragon with a "hilly" back. This is the most scenic part as you can see the sea on each side of the hill: 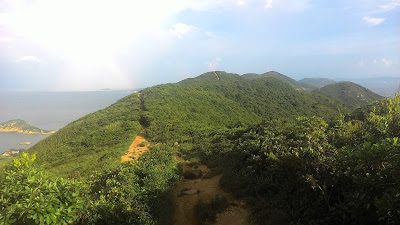 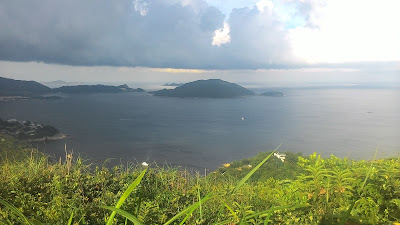 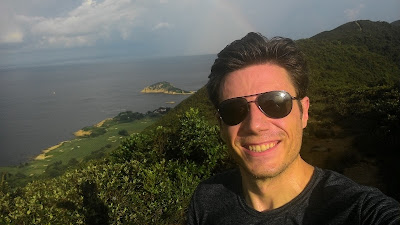 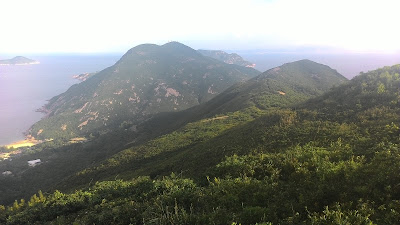 Eventually Marc reached the end of the trail, where a convenient bus stop (To Tei Wan) is located, and took the bus back to the city.

As to me, I decided to do some shopping in Mongkok on "Ladies Street" a street lined with stalls that sell bags, clothing, souvenirs and other tempting knick knacks. Later that evening, I met up with Curtis to go see a Cantonese Opera at the Sunbeam Theater in North Point (one of the last Cantonese Opera theaters in HK). 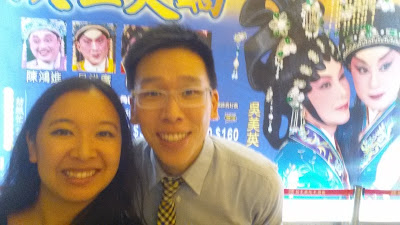 Then it was time for a delicious mango dessert (and a questionable durian puff). 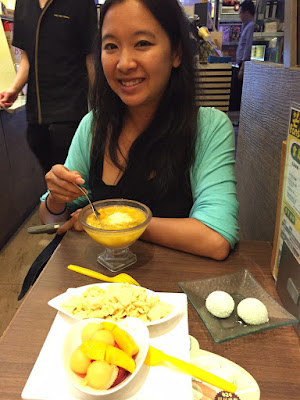